The Structure, Components, and Function of Extracellular Matrix 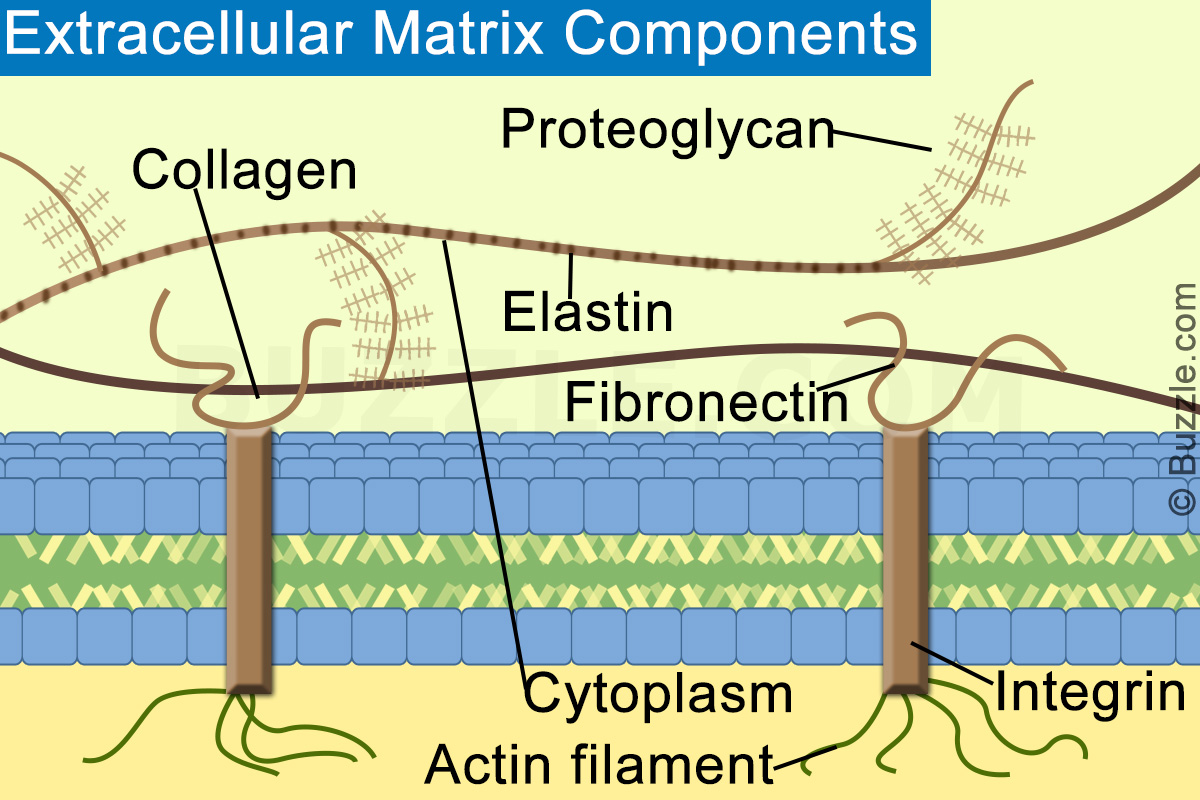 Extracellular matrix is the extracellular, complex mixture of various biomolecules and fibers secreted by cells in the tissues of multicellular organisms. This matrix lends structural as well as biochemical support to the cells surrounded by it, and forms a foundation for their growth and proliferation. BiologyWise provides an in-depth study of the components, structure, and function of extracellular matrix.

The composition of extracellular matrix (ECM) is tissue specific, however, its functions with respect to cellular adhesion, communication, and differentiation remain uniform irrespective of the change in composition.

The extracellular matrix (ECM) acts as an adhesive that holds all the cells of a tissue in place. It also forms a few specialized structures such as cartilage, tendons, and the basement membrane (also called the basal lamina). It not only functions as a physical scaffolding, but also provides a channel for the migration and communication of cells via the use of signaling molecules. It consists of a variety of growth and differentiating factors that regulate and influence development, migration, proliferation, shape, and metabolic functions of the cells.

The various components of the ECM cause it to exist as a highly organized structure. The cells embedded within it interact with the matrix as well as with other cells due to the presence of specialized matrix receptor molecules. These molecules interact with the matrix as well as the internal processes of the cell, thereby, bringing about cellular exchange of signals. Despite the organized nature of this matrix, it is not rigid and static. It is capable of being remolded by a cell around itself, according to the requirements of that cell. This remolding occurs by the selective secretion of the ECM coupled with the action of proteolytic enzymes.

Since the composition of the ECM is dependent on the cells secreting it, different organisms exhibit major differences with regards to the ECM. In case of fungal organisms, the ECM is majorly composed of chitin. This is also true in case of invertebrates like arthropods. Plants possess an ECM that is rich in cellulose. The most complex form of ECM is, however, possessed by multicellular vertebrates.

They are long, rigid, unbranched polysaccharide chains. These chains are composed of repeating disaccharide units with one of the units being an amino sugar. The amino sugars are mostly sulfated and possess carboxyl groups. Since these functional groups have a natural negative charge, they attract positive ions such as sodium ions. This quality allows the buildup of a high concentration of sodium in the ground substance. The high salt concentration due to osmotic pressure leads to the migration of the interstitial fluid into the ground substance. The presence of this fluid imparts incompressibility, but at the same time due to the negative charges on the glycosaminoglycans, the chains repel each other, eventually, resulting in a slick and slippery fluid (mucus, synovial fluid). Out of the 5 major glycosaminoglycans only one is not sulfated. The different types of glycosaminoglycans are as follows.

It is the only non-sulfated glycosaminoglycan, and hence, does not bind to proteins to form proteoglycans. It is widely distributed throughout the animal body, and is found in varying amounts in almost all tissues and fluids in adults. It can be observed in loose connective tissue, cartilage, skin, and vitreous and synovial fluid. It is a polysaccharide consisting of alternating units of D-glucuronic acid and N-acetylglucosamine. Its presence causes the tissue to resist compression, and hence, is found in load-bearing joints. It also acts as a regulatory molecule involved in the processes of healing, inflammation, and tumor development. It has also been observed to interact with the transmembrane receptor CD44 to facilitate cell migration during tissue repair and morphogenesis.

It is primarily found in hyaline and elastic cartilage and bone tissues. Its chain consists of alternating units of N-acetylgalactosamine and glucuronic acid. It lends mechanical and tensile strength to the cartilage, aortic walls, ligament, tendons, and bones. They have also been observed to form large aggregates by binding to hyaluronic acid.

it is also known as chondroitin sulfate B and is majorly found in dermal tissues, tendons, ligaments, heart valves, fibrocartilage, arteries, and nerves. It also consists of alternating units of N-acetylgalactosamine and glucuronic acid. It binds to Type I collagen fibers to exhibit a role in coagulation, wound repair, and fibrosis.

It is found in the bone, cartilage, and cornea. It is a linear polysaccharide consisting of alternating repeats of galactose and N-acetylgalactosamine. It acts as a lubricating shock-absorber, and hence, is present in joints. It also provides mechanical strength to the tissues.

It consists of repeating units of glucuronic acid and N-acetylglucosamine, and is found on the surface of fibroblast and epithelial cells. It is also found in the basal and external laminae. Its binding to fibroblast growth factor (FGF) allows it to mediate cell adhesion. Its other function includes regulation of angiogenesis, coagulation, and tumor metastasis.

They are the macromolecules formed as a result of covalent bonding between glycosaminoglycans and protein cores. The glycosaminoglycans appear like the bristles of a bottle brush with the wire stem represented by the protein core. These macromolecules exhibit a high degree of viscosity, and hence, acts as good lubricating agents. This also allows them to resist compression, and the viscous nature impedes the fast migration of microbes as well as metastatic cells. Proteoglycans also possess certain binding sites for signaling molecules which when bound show either an enhancement or an impediment in their activity. This binding ability is also used to trap and store growth factors within the ECM. They are separated into two categories based on their localizations, and are as follows.

Secreted Proteoglycans
They promote and enhance cell adhesion. They are of two sub-types depending on the bound glycosaminoglycans.

Aggrecan – It consists of protein core bound to keratan sulfate and chondroitin sulfate, and is expressed in the cartilage.

Perlecan – The protein core is bound to heparan sulfate, and it is expressed by all the cells comprising the basement membrane.

Membrane-bound Proteoglycans
They are responsible in linking the cells to fibronectin and collagen fibers.

Syndecan – It consists of heparan sulfate and chondroitin sulfate, and is expressed by embryonic epithelium tissues as well as the fibroblasts and plasma cells.

They consist of various domains that bind individually to cell surface and transmembrane integrins, collagen fibers, and proteoglycans. This multiple binding helps in regulating the ability of the cells to adhere to the ECM. In addition to their adhesive quality, they also function in the transportation and transmission of signaling molecules between cells in order to bring about the repair and development of the tissues.
Entactin/Nidogen
It is present in the basement lamina, and has a primary function to link laminin with collagen fibers.
Osteopontin
It is primarily found in the bones where it promotes osteoblast adhesion to ECM, thereby, providing mechanical and tensile strength to the whole bone.
Tenascin
It is a special glycoprotein that is expressed only in embryonic tissues, wounds, and tumors. It plays a vital role in cellular and tissue development, and binds to cells via the integrin molecules.
Thrombospondin
It is present in blood plasma, platelets, fibroblasts, endothelium, and smooth muscle cells. In the event of tissue damage or injury, it is secreted by the blood platelets, and binds to fibrinogen in order to induce blood clotting. It is also seen binding to collagen and fibronectin in blood vessels and skin cells.
Chondronectin
It is exclusively present in cartilage tissues where it binds to chrondocytes, collagen, and proteoglycans to impart structural strength.

Collagen
It is the most abundant protein in the body, and is present in the ECM as a fibrillar protein to provide structural support to the cells in the tissue. It is produced by fibroblasts and endothelial cells. It is abundantly found in tendons, cartilage, bones, and the skin. The structure of collagen fibers consist of three helically wound polypeptide chains. It is secreted by the cell in its precursor form, which is later cleaved to produce collagen depending on the cellular requirement. Depending on the eventual structure of the fibers, the fourteen types of collagen can be classified into 5 major categories as follows.

Elastin
it imparts elasticity to tissues allowing them to expand and contract as per the need. This quality is vital in structures like blood vessels, lungs, skin, and ligamentum nuchae. Elastins are synthesized and secreted by fibroblasts and smooth muscle cells. They are highly insoluble, and are released as a precursor molecule upon contact with a mature elastin fiber. The precursor molecules (tropoelastins) are then deaminated and incorporated into the mature elastin strand.

Fibronectin
This glycoprotein helps in the adhesion of collagen fibers to the cells, thus, helping them migrate through the ECM. This occurs as a result of the binding of the collagen fiber with the transmembrane integrin causing a cascade or processes that lead to the reorganization of the actin filaments in the cytoplasm. This eventually leads to the migration of the cell. Fibronectins are secreted in an inactive folded form which is unfolded and activated on binding to integrin molecules in case of tissue injury. These molecules bind to blood platelets and bring about blood clotting and wound healing.

Laminin
It is found in the basal lamina and external lamina of muscles in a web-like structure. This structure enables it to bind to other ECM components such as collagen, heparan sulfate, and cellular adhesion receptors to bring about cell adhesion. It also plays a role in cellular migration, differentiation, and development.

During cancer metastasis, the cancerous cells utilize proteolytic enzymes and matrix metalloproteinases to alter the ECM in such a way that cellular migration of the aberrant cell is allowed and enhanced causing cancer to spread to other tissues. The study of the components of the ECM have now opened up avenues for the medical applications of this cellular secretion. Studies have shown that ECM can be used to heal and regenerate tissues. Further research on this feature would lead to the development of a medical procedure involving the use of ECM to regenerate limbs and to recover from physical and structural defects in the body.